Best quote of the night! Or it possibly could have been Kelly calling Vicki a fart (“silent but deadly”)! Overall, part one of the OC Reunion was basically just a Kelly vs. Vicki match, which was super surprising to me because I thought they were all good. Guess not. 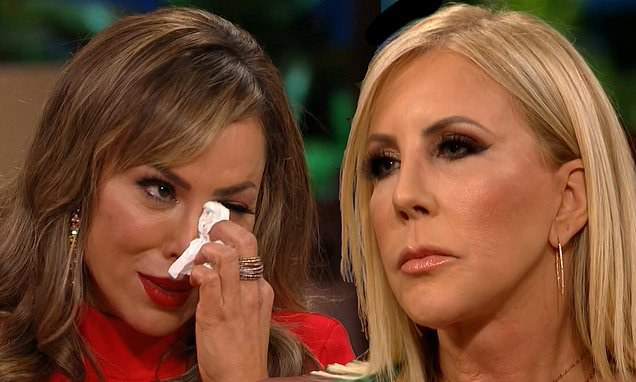 Researching their feud a little more after watching last night, Kelly said that she thought the two of them left the reunion on good terms, but watching the promo brought back the emotions for Kelly in regards to Vicki’s hurtful words and accusations. Honestly, I had no idea how serious it was between the two of them, so much so, that Kelly said she wouldn’t return next season unless Vicki was off the show.

At first, I thought their fight was over Vicki setting Michael up on a date and not telling Kelly, only to then double date with Michael and his female friend (who it turned out was a mutual friend of both Vicki and Kelly!!). Strike one Vicki. Not only did Vicki strike out there during the season, but within the first 10 minutes of last night’s reunion, Vicki had strike two in which she showed her hypocritical side (a very big side of  her) when she said she didn’t want to be a “party girl” anymore, or one who went to out bars all the time, yet got wasted in Mexico at Andales this season (and also partied it up intensely again in Jamaica).

Strike two ya hypocrite. But honestly, the straw that broke the camel’s back for how absurd Vicki is came when she spouted off that Kelly not only does cocaine, but she’s never with her daughter, only to then backpedal and say that their visitation arrangement is between “you and Michael.” 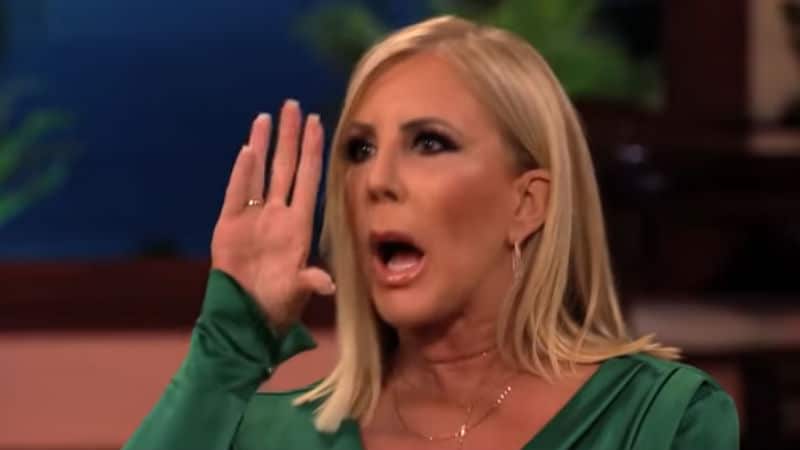 What was most shocking to me as I watched (and not just because I’m team Kelly) was how nonchalant Vicki was in saying everything. She kept such a straight face and seemed to just blame it on the fact that Kelly called her fat or compared her to a fart. Even Tamra and Shannon couldn’t seem to get through to Vicki that the accusations she was making were intense. But …

She accused David of beating Shannon, Eddie of being gay, and then there was the Brooks of it all. She ruins relationships and hurts families through her words (& lies) and here she is now doing it to Kelly. Strike three Vic. I really hope she’s not saying these awful things just to secure her spot on the show, but I could totes see that happening now that OGs can be cut (ahem LVP). Ahh, suppose we’ll see how this ends in the next two weeks (it’s a three parter right?) with the continuation of the reunion. But for now … whose side are you on? 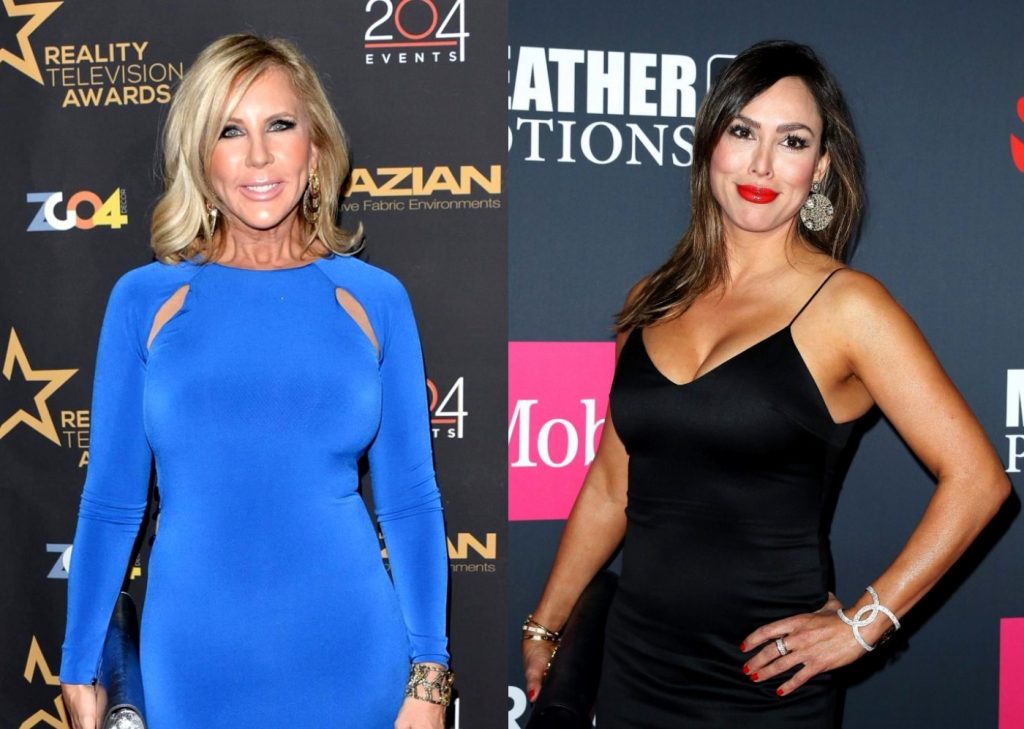 I realize this movie has been out for what seems like forever, and MHH had yet to review it. Honestly, I wasn’t even sure I was going to because I had so many mixed emotions regarding the film. It took me a couple weeks to process what I watched, but I think I’m ready to discuss now!

I like Bradley Cooper as an actor, but I don’t think I like like him as an actor. I don’t run to the theater to see a Bradley Cooper film, but Star is Born may have changed that. Not only did I believe him as a singer (and don’t mind listening to him on the soundtrack), but I completely bought into the fact that he was a troubled addict. He made his character seem so sloppy and in constant need of a bath with that greasy hair. He absolutely committed to the part, brought pain to the story, and should without a doubt win all the awards for his role.

Whether you’re a fan of rock, country, or pop music there is something for you in this film. Whether you love “Born This Way” Gaga or Joanne Gaga, she’ll give you something in this film (I more prefer Joanne to be honest). Fun fact: if you didn’t know, many of those festival performances were real, including an actual Coachella performance. Don’t believe me? Click here to read about it!

My favorite Gaga solo songs included “Look What We’ve Found” and “Always Remember Us This Way;” oh! and if “I’ll Never Love Again” doesn’t win every Best Song category during award season, the whole system is SERIOUSLY DISTURBED! I loved all the Cooper/Gaga collabs too, including “Music to My Eyes,” “Diggin’ My Grave,” and OBVIOUSLY “Shallow.” Even if you don’t think the film will be your cup of tea, watch it just for the music!

The Not So Good

I don’t blame her acting and I’m not here to announce that she is a bad actress. This happens with some of my favorite actors/actresses and Lady Gaga falls into it. I simply could not suspend my disbelief with her while watching. I never bought into the Ally/ Jackson love story because I just kept seeing Lady Gaga next to Bradley Cooper. I did mention how great BC acted and yes, he became his character, but honestly I think he needed a different lead (albeit I have no idea who could have played the part … so maybe I should just shut up now).

Warning ** spoilers ahead  **so maybe stop reading now if you haven’t seen the film.

I had no idea prior to watching that Bradley Cooper’s character was an alcoholic and drug addict (come to find out this is the case in all three films). Not only that, but his demons with his father and his brother were hard to watch too. While his ending was ruined for me by a friend, everything leading up to it, especially the scene where he called her ugly and the Grammy speech, were torture to watch. I had a really really hard time being emotional at the end of the movie while she was singing “I’ll Never Love Again.” If anything, I felt anger. I was angry at Cooper’s character for leaving Ally. If she was his absolute, one true love, he should have got clean for her … regardless of what that dweeb manager of hers said. I was so pissed at him for leaving her in the end and honestly, it ruined the movie for me and that’s why I can’t love it as much as the rest of the world.

Then come find me and let’s discuss!

And if you thought this was a Riverdale post, I’m going somewhere with this, I promise. I was a Grey’s STAN until the show got out of control: Meredith almost drowns, the whole Denny debacle,  George’s death, the hospital getting shot up, the airplane crash, Lexi & Mark’s death, etc etc etc …

My whole point with the Grey’s reference is that the story lines got so so so far gone, I couldn’t watch anymore. This brings us to Riverdale. Is the show heading in the Grey direction? Let’s investigate.

Aka .. the best season. Honestly, the show could have stopped after its first season because everything came together brilliantly. I loved how the entire season was centered around who killed Jason Blossom … and the big reveal (regarding his father) was the perfect twist. While Archie was intolerable this season (remember when he was banging his teacher?!), the sub plots with Chuck Clayton, Polly Cooper, & Fred’s business made up for it. The mystery surrounding Jason got solved in the end, leaving us all excited for a second season and nonstop wondering where the show will take us.

Things started to get a little out of control in season 2. While I suppose the plot of the Black Hood was interesante, I felt it was too similar to the first season (hunt for a killer again … ??). THEN there was the Nick St. Clair of it all, Jingle Jangle, Bughead drama (ugh and her striptease?), Mayor and Sheriff boning, the Riverdale Reeper, and Hiram Lodge.

The plot line with Hiram acting like a “mob boss” and getting Archie to do all this dirty work of his (as a high schooler no doubt) was so ridiculous and I felt had nothing to do with finding the Black Hood (which I thought was the central plot of the season; was it not?). Then there was the whole mayoral campaign between Fred and Hermione, plus the second MOST RIDICULOUS sub plot EVER: Chic.

Seriously … WHAT did he have to do with the story line besides get Betty and her mom wrapped up in murder? Zip, zilch, nada! Speaking of Betty’s f’ed up family, the final nail in the horrible coffin that was season 2, was the reveal that Hal was the Black Hood.

Betty we all have a darkness in us!

After all of that, the show could not get any more dumb. Enter Gryphons and Gargoyles.

I’m not even going to waste my time describing my thoughts on this plot; I’ll let the image above speak for itself.

And yet … and yet … Riverdale is one of the shows I watch live every week; I never let it back up on the DVR. Why is that? How does something very far gone with ridiculousness hold my attention so close that I abandon my husband for an hour every Wednesday night to see what happens? In fact, it’s more of a “must know” what happens feeling.

Perhaps, the show knows how out of control the story is; maybe the writers and actors are all in on the joke.

Or, perhaps it’s a show made for teens, starring teens (or close to it) and it’s not something to be taken too seriously. It helps viewers (especially teens) escape from the pressures of the real world … I mean, reality is pretty messed up, but at least we don’t have to fear a Gargoyle King.

I can not believe my silly little hobby has reached its one hundredth post! I would like to thank my husband for leaving me alone with the upstairs television to watch Bravo (or maybe he leaves me alone because I’m watching Bravo …?), Instagram & Twitter for allowing me to connect with other pop culture fans, as well as trash talk those celebs we don’t particularly like, all my friends who love the same shows I do and gossip about them with me (Mack = Housewives, B = Bachelor, Lyssie = Queer Eye), and anyone who chooses to read what I write or take an interest in it … and for all those who don’t? You’re missing out!

Obviously, #100 had to be Bravo related because without Bravo, MHH wouldn’t exist … see below for my thoughts on everything Housewife related from this week. Don’t forget to view all 99 past posts by clicking up in the right hand corner. Follow me on IG and Twitter too! Happy reading and here’s to 100 more!

Hope you all have a wonderful, drama-free week!