My name is Katy and I am a Justin Timberlake fan.

Going strong 20 years now, and honestly, I don’t care whether you are or not. I wasn’t going to comment on his Halftime Show from last night’s Super Bowl but then I thought of two things. One, this is my blog and my outlet to share MY opinions and what I LOVE, and if you know me, you know the love I have for JT is unconditional & never ending. Two, I’m tired of seeing all the hate on social media he got for the performance, so I’m here to defend defend defend!

Before we get into the actual performance, let’s just realize we live in a world right now where no one can do right (which I totally get is the pot calling the kettle black because majority of my blog is me complaining about actors or making fun of reality stars, but whatever I’m getting cheese fries). Timberlake got hate as soon as it was announced he was performing, especially from Janet Jackson fans, but come onnnnnnnnnnnnnn! I take a firm stance that his 2004 SB performance with her (#nipplegate) was completely planned and if you think for a second that it was a “wardrobe malfunction” then …

UGH and the #JanetJacksonAppreciateDay trending on Twitter?? Again I say, come onnnnnnnnn! Anyway, people were going to go in on him from the beginning no matter what, so he had quite a bit to prove.

Not everyone was rooting against him though. Lady Gaga (who is a QUEEN) tweeted out support for him before the performance, wishing him luck, as did Jimmy Fallon. So let’s get into the actual performance and see why he succeeded when so many said he failed.

First, the audio. People were saying it was fuzzy; I didn’t hear fuzz, but I’m sure if people instead heard total clarity, they’d have then said he sang poorly live. Second, the Prince tribute. People were saying it was inappropriate and more; yet if he hadn’t done one, people would have been upset. Last, singing Rock Your Body (aka the #nipplegate song); it’s one of his biggest dance hits, and to those people saying he smirked right at the “Janet Line” you’re reaching so far your arms HAVE TO be tired! Seriously, watch the footage.

I have seen Justin Timberlake in concert and let me tell you, last night’s show was IT. That was a straight thirteen minute Justin Timberlake concert. Just like at one of his shows, he’s dancing and singing, and straight PERFORMING his heart out,  fusing songs together, singing all your favorites, plus moving all over the arena! He did the same thing last night. From starting underneath the stadium, then waltzing down onto the field to the main stage, then having a center stage where he could perform from any side of it, to straight dancing on the field, to performing with a marching band (which we’ll get to in a minute) to straight dancing into the crowd! Sheesh, I’m just tired describing it all! But at an actual Timberlake concert, it’s two hours of all that (and no one is rooting for him to fail).

I promise I’m almost done ranting, but I want to discuss my favorite part of the whole show (and it wasn’t changing one middle schooler’s life by taking a selfie with him, but props for JT for doing it!) THAT! MARCHING! BAND! during Suit & Tie! Did anyone catch the football reference?

Get it? Halftime of a football game and a marching band is performing? Also, raise your hand if you knew that was the actual University of Minnesota marching band? Yeah, I didn’t think so. 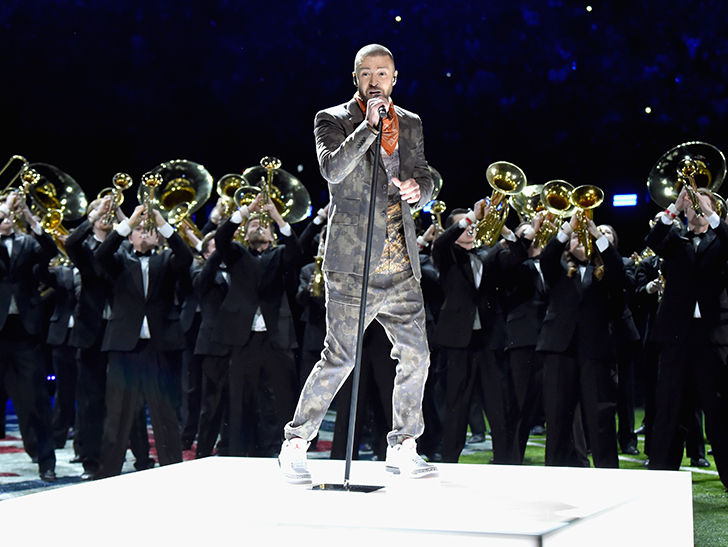 Well, if you’ve made it this far through the post, maybe I’ve started to convince you that his performance was outstanding and deserves credit, not criticism. If not, maybe these famous voices can help sway you because JT SLAYED AND KILLED SUPER BOWL LII!